The Story Of English, A Review 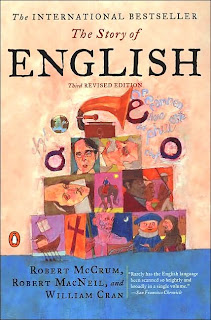 "The Story Of English

" may sound like a textbook, but it's a very compelling read.  When I picked it up a few years ago, I couldn't put it down until I finished it.  The evolution of the English language is an endlessly fascinating subject.  Across the continents, English has scores of faces, and there are many varieties of the language.  English has twice the vocabulary words of French, Spanish, German, or Italian.  The book explains why.  English has always been ... and continues to be, an evolving language.  From Anglo-Saxons, Normans, and cockney peddlers to Hessian soldiers, African slaves and Appalachian settlers, each group contributed to the rich lexicon that has become modern English.  Whole chapters are devoted to Scotland, Ireland, Australia, the Caribbean, India and contemporary African nations. 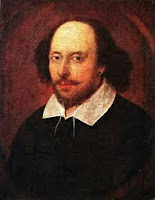 The book was co-written by Robert MacNeil of PBS's The MacNeil/Lehrer NewsHour.  It's well researched and covers centuries, yet is vivid and easy to follow.  There are useful photographs and maps throughout the text to provide clarity, insights and make history come alive.  If you read it, you will be absorbed, entertained and learn a great deal about the vernacular.  Every English speaking person should read it.
Meanwhile, Loretta (a reader) sent me the following fun trivia, which explains the roots of some popular English language sayings.  I hope you enjoy them as much as I did.  Read them just for fun -- I didn't turn up information to disprove them, but scholars often debate the definitive origins of words and phrases:

In Shakespeare's time, mattresses were secured on bed frames by ropes.  When you pulled on the ropes the mattress tightened, making the bed firmer to sleep on.  Hence the phrase, “Goodnight, sleep tight.” became popular.  Submitted by Marg Duncombe.

At one time, English pubs baked a whistle into the rim, or handle, of their ceramic cups.  When patrons needed a refill, they used their whistle to get some service.  “Wet your whistle” is the phrase inspired by this practice.  Submitted by Marg Duncombe

Before thermometers were invented, brewers of beer had to dip a thumb or finger into the mix to find the right temperature for adding yeast.  Too hot or cold, and the yeast wouldn't rise.  This is where we get the phrase "rule of thumb."  Submitted by Marg Duncombe.

A practice in Anglo-Saxon England was for the bride's father to supply his new son-in-law with all the mead [or honey-wine] he could drink for an entire month after the wedding.  Since the calendar was lunar, this period was called the “honey month,” which we know today as the honeymoon.  Submitted by Tana M. Schiewer

In old English pubs, ale was ordered by pints and quarts.  When customers got unruly, the bartender would yell,  “Mind your pints and quarts, and settle down!”  From this, we get the phrase, “Mind your P's and Q's.”  Submitted by Marg Duncombe.
If you know the origins of other old sayings, please share them with us.


You may also enjoy:
An Artist At Work, A Review
Step Into The World Of Ideas
The Story Of Stuff, A Review
The Everly Brothers Sing, Reviews
Posted by Debra Turner at 8:58 AM