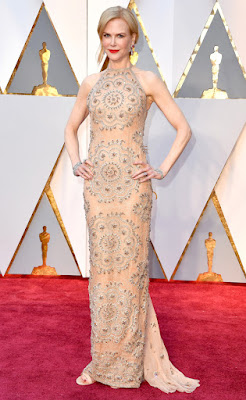 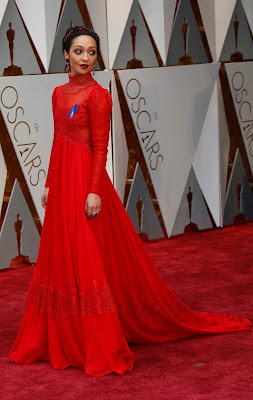 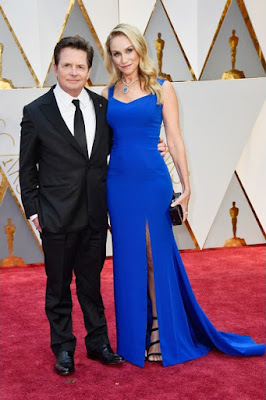 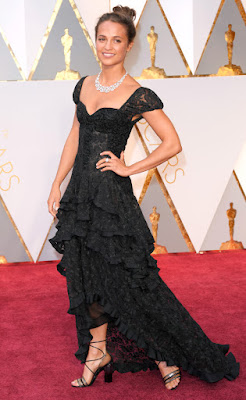 I'm not going to lie. I'm having trouble picking out favorite dresses at this year's Academy Awards. I'm not a fan of the full skirted, antebeullum-que styles I'm seeing, and I don't like the slits down to an actress' belly button. (Can't a designer give a client a whole dress?😎) And ... with the big puff ball gown, are you wearing the dress, or is the dress wearing you? Nor am I seeing showstopper dresses this year. So with these remarks said, above are 4 of my favorites. What are yours?
Nonetheless if you do go full skirted antibellum, have fun with it like Leslie Mann. She looks adorable in her Disney inspired princess gown! You still notice her lovely waist. 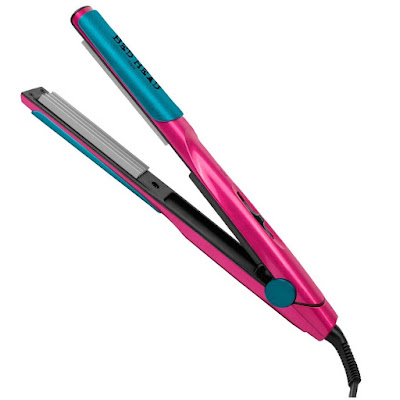 In life there are many things a person has little control over, somethings it's your adult children, a stubborn parent, or even the daily happenings in an anxious country. To make up for the many annoyances, every day should be a good hair day. Right? At least give us that!

1) In the 1990's I crimped my long straight hair a few times a month. I still like the look and still have the crimper, but as an older model, it takes about 5 minutes to heat up. The Bed Head Little Tease Crimper is light, slim, ultra fast and easy-to-use. It gets hot in 30 seconds. Do you have 30 seconds of patience? Why ... yes!!

The crimper has toumaline/cermamic plates to protect the hair against heat damage. Using the tool adds volume to straight hair, which can go flat at the end of a long day.

2) The Kiss Instawave Automatic Hair Curler heats in seconds to create beautiful soft curls without tangling. The ceramic ionic technology delivers shiny, frizz-free hair. With it, you can also control the direction of the curl. 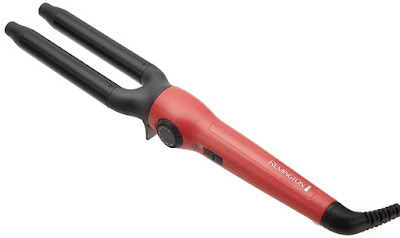 3) For natural beach waves, wrap sections of hair around the double barrels of the above Remington hair CI52FO Wrap to Wave Styler in a figure 8 shape. It has 30 different heat settings, so the fork-shaped gizmo works on any hair type.
Not only do customers give these 4 hair tools high ratings, they are priced between $18 and $35. Because ... it shouldn't take much time, effort or money to have a good hair day. So at least a gal can be in control of her locks!

Bed Toppers ... Slurge Or Save? 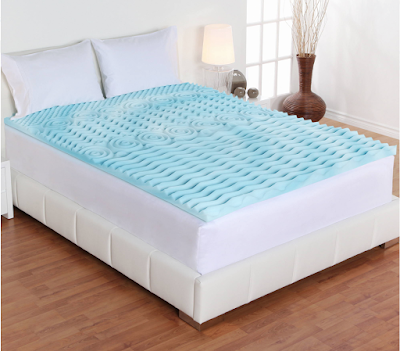 Years ago I bought a feather bed topper from Land's End. Since I prefer down-feather pillows to foam, it would be logical to assume I loved it, but it wasn't as comfortable as I hoped. One issue ... it forever slid out of place.

Finally after using it for a while, it needed to be machine washed and dried, and some idiot put it away in a clear plastic bag without realizing it was still damp. (Ok, the idiot was me, and I learned my lesson. Even after down feels dry to the touch, wait several more days before enclosing it!) The topper got mold and had to be trashed.

For several years now, I've been without a topper. I have a firm mattress, and recently I decided to try sleeping on my stomach less ... and more on my back and sides. After a night on my stomach, I sometimes wake up with railroad-track-like-marks on my face, so perhaps sleeping in other positions is a better habit. Having a bed topper is ideal for back sleepers. 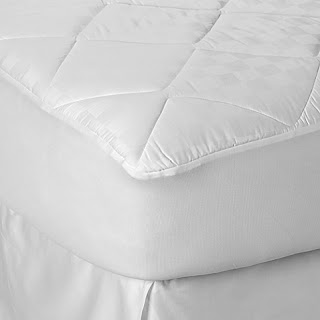 Deciding against another feather topper, I bought the Comfort 2-Inch Orthopedic 5-Zone Form Mattress Topper (about $20 bucks on sale at Walmart. I selected two of the 2-inch thick size and stack them -- one under a cotton therapeutic mattress pad and the 2nd one directly under the fitted sheet. A bit of an experiment, but it works! The toppers are plush and comfortable: supportive with combined 4-inches of cushion.

The 5-zone contoured design feels nice! The foam is enhanced with plant-based materials, that are reported to be eco-friendly; and treated to stay cool and odor-free, i.e. selling points for me. (Probably an egg-crate design is equally pressure-relieving comfortable.)

Surprisingly, I find the $20 toppers more comfortable than the $100+ feather topper was. You can also replace the inexpensive foam toppers often without feeling the pain!

This is one time when cheap-and-good-enough is better than expensive. Sometimes you don't need to buy top of the line.

On Valentine's Day, we feature the color red. It is an intense hue that symbolizes passion. So get in the spirit by wearing something bright red today. 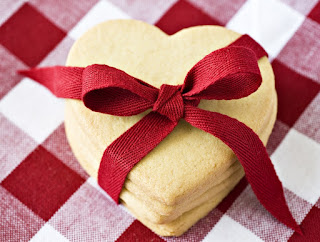 Celebrate with a heart pastry and red ribbons. 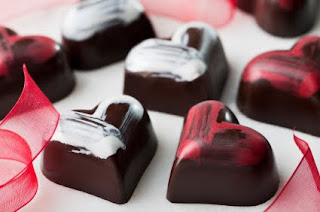 Treat yourself to a piece of fine dark chocolate ... or two, or three, or more! 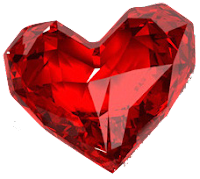 Dress yourself with a bit of glitter, and enjoy a delicious dinner with someone special. Love, kisses and roses to all my readers.🌹🌹🌹


You may also enjoy:
In My Jewelry Box
My Love Letter To Queen
Happy Saint Valentine's Day
Queen Victoia & Prince Albert: Books & Series
Posted by Debra Turner at 12:00 AM 2 comments:

I enjoy history and will read nearly anyone's biography.

On a trip to Barnes and Noble I tried to buy Queen Victoria by Lytton Strachey. I found the book on a shelf, read about 10 pages, but desiring to read the best bio on the subject, I waited a beat before heading to the cash register; instead, I went home to google some book reviews. After reading favorable reviews (one by The New York Times), I returned  to the store 3 hours later to buy it.

Surprise, somebody else bought my book! What are the odds? A manuscript published in 1921 about a 19th century British monarch, who died in 1901! Are those flying off the shelves? I couldn't believe my eyes. So I returned home empty handed.

Not to be defeated, I looked online to find it as a free audiobook -- the publication is in the public domain. Nice! You can listen to it here.

Interesting bio on several levels. Queen Victoria was 3/4 German, born in England; Albert was her first cousin. Marriage is challenging, including happy ones. Ambition and power are fascinating, even if people who desire and acquire it, are virtuous and well-intended. Emigrating from Saxe-Coburg, Germany to England came with issues. Moreover, I can tell you this from a lifetime of personal experience: Germans are complicated, if seldom dull. You must be strong, well-informed and laser-focused to stand up to them!
How fortunate to find the above, age-twenty-something photos of Albert and Victoria. We get to see the handsome face that won Victoria's heart, and have a glimpse of them as a young couple.
Here they are in their mid-30s. I am fond of Victoria's directness and candor in manner. She was bright, a passionate person, who loved deeply ... hard with her whole heart. She recognized her husband's intellect and supported him in his efforts to champion the Industrial Revolution, public housing, the arts, anti-slavery and eventually politics in his adoptive country. Contrary to belief, she had a great sense of humor and laughed often. What's more, she had to function in a man's world. In her day women couldn't vote (nor own property!), yet prime ministers reported to her.
What I like about Albert was his desire to do good and live a life of purpose. He was high-minded and principled. No doubt, Albert was a man of the 19th century; but progressive for his time. He was somewhat of a Renaissance man, with multi-interests and talents. And naturally, I like that Albert was a hands-on, if demanding father, who was faithful to his wife and children. Unlike his own philandering father and brother, the Prince Consort famously did not flirt with the ladies, ever!


After marriage, Victoria lost a bit of her independence and perhaps herself. As Albert was a 19th century man, she was a 19th century woman, who deferred to her husband over their 21 years of marriage. They had nine children. But, the bottom line is: Queen Victoria adored Albert throughout her life; and despite the tensions and compromises of their marriage, they were in sync, and he made her happy. Overall, they seemed right for each other. It was a love match. 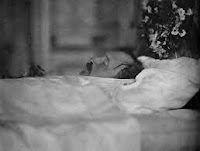 I recommend watching Queen Victoria, the miniseries. Season one was faithful to history; and the charismatic cast is brilliant at fleshing out the historical figures.

By the way, I adore their plush, royal bed (below), where they have their talks and come to love and understand each other.
Next I'm reading: Victoria: The Queen by Julia Baird and Uncrowned King: The Life of Prince Albert by Stanley Weintraub, while I wait for the television series to resume later this year. After these books I will probably have my literary fill of strong-willed Germans.😊

Let's go dress shopping again! Retailers are running their annual sales, which make it an ideal time to add to your wardrobe. Sequins and lace, polka-dots and florals, smooth vs textured, belted or loose, v-neck or crew ... the possiblities are endless.

In lieu of one-of-a-kind, I'm featuring several dresses, which are classic enough to wear time and again, yet also have some eye-catching embellishments. Because nobody wants to wear plain and boring! Let's call it classic-plus-swank style. The following dresses are understated with a wow-factor.


So how did I do in my selection? What makes you feel pretty? Do you have a favorite length, color, or style of dress?