Macy's Is Getting A Facelift

Macy's Herald Square first opened it's doors 155 years ago in 1858. Orginally known as R.H. Macy's & Co., it has occupied its present location, 34th Street and Broadway, for the last 111 years. Last year the landmark building began a full scale rennovation of the entire store.

Over the weekend I paid a visit. I can always find exactly what I want at Macy's. Actually, I can turn into a frenzied fashionistra -- finding tons of merchandise to buy at Macy's -- which is why I don't go near the place unless I truly need something.

It has phenomenal sales -- 40% off and higher -- usually around 3-day holiday weekends like the 4th of July. Stop at the visitor's center to show your passport, or out-of-state driver's license and get an extra 10% discount on all your purchases. The visitor's center is located in the cellar, on the Broadway side of the building.

Below is the floor plan of the 9½ story,  spruced-up department store. The cellar adds a 10th floor. The interior looks shiny and new, but the departments have not shifted much, which is a good thing. I don't know about you, but I only like a change if it's an improvement. If you know Macy's layout, you can still find familiar departments, mostly in their old spaces. Click the image below, then hit "command" and "+" to enlarge. [If you email me, I'll send you the pdf file, which is cystral clear to read and print.] 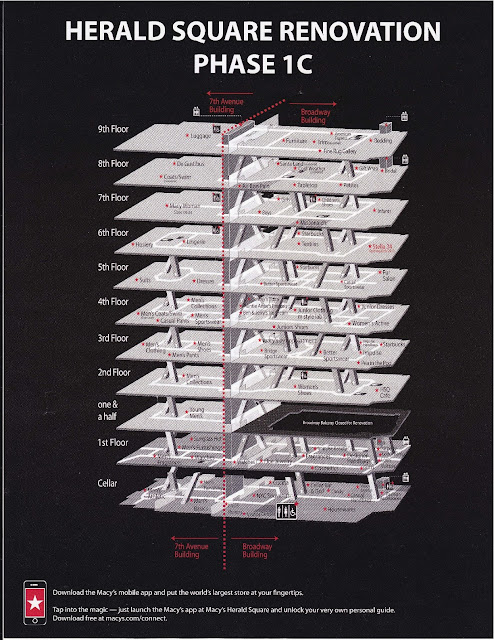 You might like sitting in front of Macy's (on Broadway) under the umbrellas, drinking coffee or tea. I miss the days when Macy's sold gourmet deli food. Nowadays you will find Starbucks and several other well-known franchises scattered throughout the store.

You may also enjoy:
Take A Trip Down Memory Lane
At Overstock Find It For Less
Save On Summer Fashion Essentials
Ted Baker Opens A New Fifth Avenue Store
Posted by Debra Turner at 12:01 AM