The question of the day is: How are you spending your extra pandemic hours at home?
I have stepped into the past to watch history documentaries, as well as, historical fiction -- dramas that combine facts with inventions, including The White Queen, The White Princess and The Spanish Princess. As long as I can google known facts to learn what really happened or to flesh out the true characters of kings, queens and power players at court, I will accept the historical fiction story I'm watching as entertainment, and yet often I think the truth doesn't need the invention, as the real history was dramatic and fascinating enough. The old saying applies, life is stranger than fiction. 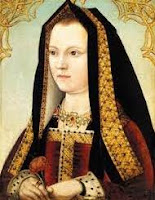 Photos: Henry VII & Elizabeth of York, the elder sister of the Princes in the tower - their marriage (happy) ended the 30 year Wars of the Roses.
Overall, I notice the 3 historical fiction series listed above get the outlines and major events right, but sometimes mess with the timeline, minor yet important details, or motivations of a character, getting them wrong by making a confident historical person weak or needy, or a righteous person of the past calculating and unrighteous. I understand the need to composite characters into one for reasons of time or storytelling, but I dislike when producers change the nature, or established deeds of a historical person. While watching you must go with it to enjoy the series ... then look the person up later to know what is real and what liberties are taken.
In school I took required Western Civilization history courses ... and yes, learned some things ... however, I have never cared to take an extended look at Plantagenet, Tudor or Stuart England thereafter ... until 2020. Mores change in a millennium, so I didn't think I could relate. But you can relate when studying the past, and I am re-examining English history in reverse order:

1) Stuarts - Mostly like them despite their faults. The Stuart kings were good fathers and (except for faithful Charles I) philandering husbands, but who protected their wives when needed. History is hard on James II, who's chief flaw was his stubbornness. James lacked the charm of his older brother, Charles II. As king, James passed laws showing tolerance of Catholics and Protestants (groups like Quakers) alike, which lead to the loss of his Crown. James II was followed by his 2 Protestant daughters: Mary II and Anne (skipping over his infant Catholic son from his 2nd marriage). Queen Anne's death ended the Stuart line.

Like Catherine of Aragon and Mary I, who were both victims of their tyrant husband and father, Henry VIII. Dislike Anne Boleyn (What somebody will do with you, they'll do to you ... and worse!)  Have sympathy for the other wives. Haven't gotten in-depth into Elizabeth I ... but will likely think she's ok.

3) Plantagenets -  I'm now watching every documentary about them. Lots of family infighting and betrayals happening. Tough times. Divided country. Family feuds with money and retainers!! Generally, I understand and like them. I like (English born, German) Empress Matilda who became a claimant to the English throne, and Eleanor of Aquitaine rocked! I like Elizabeth Woodville and Henry IV well enough. Richard III ... did he kill the princes in the tower as has been accepted for 500 years? Well, maybe not, I'm unsure. It could have been directed by Henry Tudor or his wily mother, Lady Margaret Beaufort. We will likely never know who killed those boys. Richard III was the last of the Plantagenets. Defeated by Henry Tudor, the new King (as Henry VII) spent his reign hunting down potential Plantagenet rivals whom he feared had a better claim to the English throne.

My ancestors have the same Norman roots and took the same English paths of migration as the Plantagenets, but after 600 - 1,000 years how would you truly know if you are related? I'm skeptical when people say their gateway ancestor was a long ago royal. Without a meticulous paper trail that stretches all the way back, you're only guessing. But you know what? I still hate those Tudors! The revisionists of history.😏 What a cutthroat bunch of murderous paranoids ... and nasty to their own family to boot!💂👑
You might also enjoy:
Masters Of Sex, A Review
Princess Louise, Duchess Of Argyll
The Marriage Of Charles II And Catherine Of Braganza
Aboard The Underground Railroad: A Picture Book In Verse
Posted by Debra Turner at 5:31 PM

My Blog List - I have no idea why some thumbnails are gone!